The 22 LR cartridge is popular with both novice shooters and experts. Its minimal recoil and relatively low noise make it an ideal cartridge for recreational shooting, small-game hunting, and pest control. 22 LR cadet rifles are commonly used by military cadets and others for basic firearms and marksmanship training. It is used by the Boy Scouts of America for the rifle shooting merit badge.5

The low recoil of the cartridge makes it ideal for introductory firearms courses. Novice shooters can be surprised or frightened by the noise and recoil of more powerful rounds. Beginners shooting firearms beyond their comfort level frequently develop a habit of flinching in an attempt to counter anticipated recoil.

The resulting habit impedes correct posture and follow-through at the most critical phase of the shot and is difficult to correct. With high recoil eliminated, other errors in marksmanship technique are easier to identify and correct.

Available for this round are AR-15 upper receivers and M1911 slide assemblies. Many handgun manufacturers have an upper pistol conversion kit to make it shoot 22 LR ammunition. These conversions allow shooters to practice inexpensively while retaining the handling characteristics of their chosen firearms (with reduced recoil and muzzle blast).

Additionally, 22 LR cartridge conversion kits allow practice at indoor ranges which prohibit high-power firearms. Owners of guns that use gas systems, such as AR-15 sport style rifles, normally avoid firing non-jacketed 22 LR cartridge ammunition, as the use of unjacketed ammunition may cause lead-fouling of the gas-port inside the barrel and costly gunsmithing procedures.

This can usually be mitigated by swapping the conversion kit for the standard bolt carrier group, and firing several full-powered rounds to clear the gas port and tube of any accumulated lead fouling. While not 100% effective, the extremely hot incandescent gasses produced by centerfire rifle ammunition will help to clear any lead fouling from the 22 LR ammunition.

22 LR is the least costly cartridge ammunition available.6 Promotional loads for plinking can be purchased in bulk for significantly less cost than precision target rounds. The low cost of ammunition has a substantial effect on the popularity of the 22 LR. For this reason, rimfire cartridges are commonly used for target practice.

22 LR cartridges are commonly packaged in boxes of 50 or 100 rounds, and are often sold by the ‘brick’, a carton containing either 10 boxes of 50 rounds or loose cartridges totaling 500 rounds, or the ‘case’ containing 10 bricks totaling 5,000 rounds. Annual production is estimated by some at 2–2.5 billion rounds.78

The NSSF estimates that a large percentage of the US production of 10 billion cartridges is composed of 22 LR.9 Despite the high production figures there have occasionally been shortages of 22 LR cartridge in the contiguous United States, most notably during the U.S. ammunition shortage of the late 2000s and early 2010s. 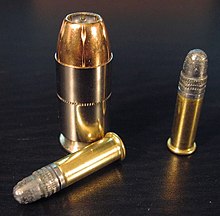 The 22 LR is effective to 150 yd (140 m), though practical ranges tend to be less. After 150 yd, the ballistics of the round are such that it will be difficult to compensate for the large “drop”. The relatively short effective range, low report, and light recoil have made it a favorite for use as a target-practice cartridge.

The accuracy of the cartridge is good, but not exceptional; various cartridges are capable of the same or better accuracy. A contributing factor in rifles is the transition of even a high-velocity cartridge projectile from supersonic to subsonic within 100 yd (91 m). As the bullet slows, the shock wave caused by supersonic travel overtakes the bullet and can disrupt its flight path, causing minor but measurable inaccuracies.

As a hunting cartridge, rimfires are mainly used to kill small game up to the size of coyotes.11 Although proper shot placement can kill larger animals such as deer or hog,12 it is not recommended because its low power may not guarantee a humane kill.13 In 2013, an elephant was killed by multiple shots from a 22 LR rifle.14

Because a 22 LR bullet is less powerful than larger cartridges, its danger to humans is often underestimated. In fact, a 22 LR bullet is easily capable of killing or injuring humans. Even after flying 400 yards (370 m), a 22 bullet is still traveling at about 500 ft/s (150 m/s).

Ricochets are more common in 22 LR15 projectiles than for more powerful cartridges as the combination of unjacketed lead and moderate velocities allows the projectile to deflect – not penetrate or disintegrate – when hitting hard objects at a glancing angle. A 22 LR bullet can ricochet off the surface of water at a low angle of aim. Severe injury may result to a person or object in the line of fire on the opposite shore, several hundred yards away.16 A 22 LR bullet is capable of traveling 2,000 yards (1,800 m), which is more than 1 mile (1.6 km).17

There are no reviews yet.