IMI is a defense systems house specializing in the development, integration, manufacturing and life cycle support of modern land, air and naval combat systems and HLS solutions. IMI’s world class combat-proven systems are developed by vertically integrated expert teams, working in close cooperation with the customers, the most prominent being the Israel Defense Forces (IDF). IMI’s products have been qualified with the IDF, US Military (Air Force, Army and Navy) and NATO nations.

This ammunition is a great choice for the shooter looking for a great affordable round for target shooting, training and practice. The Di-Cut bullet ogive was especially designed for consistent feeding and operation, preventing misfeeding in a wide range of 9mm pistols. This ammunition is new production, non-corrosive, in boxer-primed, reloadable brass cases.

After World War I, acceptance of the 9×19mm Parabellum cartridge increased, and 9×19mm Parabellum pistols and submachine guns were adopted by military and police users in many countries.15 The 9×19mm Parabellum has become the most popular caliber for U.S. law enforcement agencies, primarily due to the availability of compact pistols with large magazine capacities that use the cartridge.16

Worldwide, the 9×19mm Parabellum is one of the most popular pistol cartridges where it is legal (some countries ban civilian use of weapons that chamber current or former military service cartridges), and cartridges in this caliber are generally available anywhere pistol ammunition is sold.

From the early 1980s to the late 1990s, a sharp increase occurred in the popularity of semi-automatic pistols in the U.S., a trend foreshadowed by the adoption of the Smith & Wesson Model 39 by the Illinois State Police in 1968. In addition, the Beretta M9 (a military version of the Beretta Model 92) was adopted by the U.S. Army in 1985. Previously, most American police departments issued .38 Special caliber revolvers with a six-shot capacity.

The .38 Special was preferred to other weapons, such as variants of the M1911, because it offered low recoil, was small and light enough to accommodate different shooters, and was relatively inexpensive.17 The 9×19mm cartridge is ballistically superior to the .38 Special revolver cartridge,18 is shorter overall, and being an autoloader cartridge, it is stored in flat magazines, as opposed to cylindrical speedloaders.

This, coupled with the advent of the so-called “wonder nines”, led to many U.S. police departments exchanging their revolvers for some form of 9mm semiautomatic handguns by the 1980s and 1990s.17

With selecting and adopting the M17/M18 in 2017, the United States Army and United States Air Force chose the 9×19mm Parabellum again as the cartridge for their new service pistol. 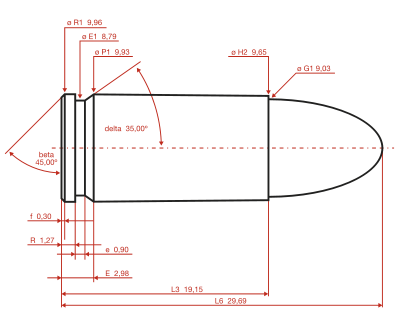 9×19mm Parabellum maximum CIP cartridge dimensions:2 All sizes are given in millimeters (mm).

According to CIP rulings, the 9×19mm Parabellum cartridge case can handle up to 235.00 MPa (34,084 psi) Pmax piezo pressure. In CIP-regulated countries every pistol cartridge combination has to be proofed at 130% of this maximum CIP pressure to certify for sale to consumers. This means that 9×19mm Parabellum chambered arms in CIP regulated countries are currently (2014) proof tested at 305.50 MPa (44,309 psi) PE piezo pressure.2

The round was originally designed to be lethal to 50 metres (160 ft), but is still lethal at longer ranges.22 The 9×19mm Parabellum cartridge combines a flat trajectory with moderate recoil. According to the 1986 book Handloading, “the modern science of wound ballistics has established beyond reasonable doubt that the 9mm cartridge is highly effective.”23

In 2014, the United States Federal Bureau of Investigation (FBI) released a report detailing the potential combat effectiveness of the 9×19mm Parabellum cartridge when compared to other calibers such as the .45 ACP and the .40 S&W cartridges that were specifically developed for use by the FBI.24

The report indicated that the new powders and more advanced bullet designs used in current 9×19mm Parabellum defensive loads allowed for the caliber to deliver similar performance to other calibers, like the .45 ACP and .40 S&W. In addition to this, the lower recoil, less wear, cheaper ammunition, and higher capacity were all reasons that the report cited for the recent surge in orders of the ammunition from various police agencies.

With a wider selection of officers being able to shoot handguns chambered in 9×19mm Parabellum, many departments chose this caliber so they could standardize a single firearm and loading, making logistics and supply easier. Due to all of these factors, law enforcement orders of 9×19mm Parabellum ammunition from all major ammunition manufacturers have risen significantly.2526

There are no reviews yet.